Death of a Pirate

Death of a Pirate 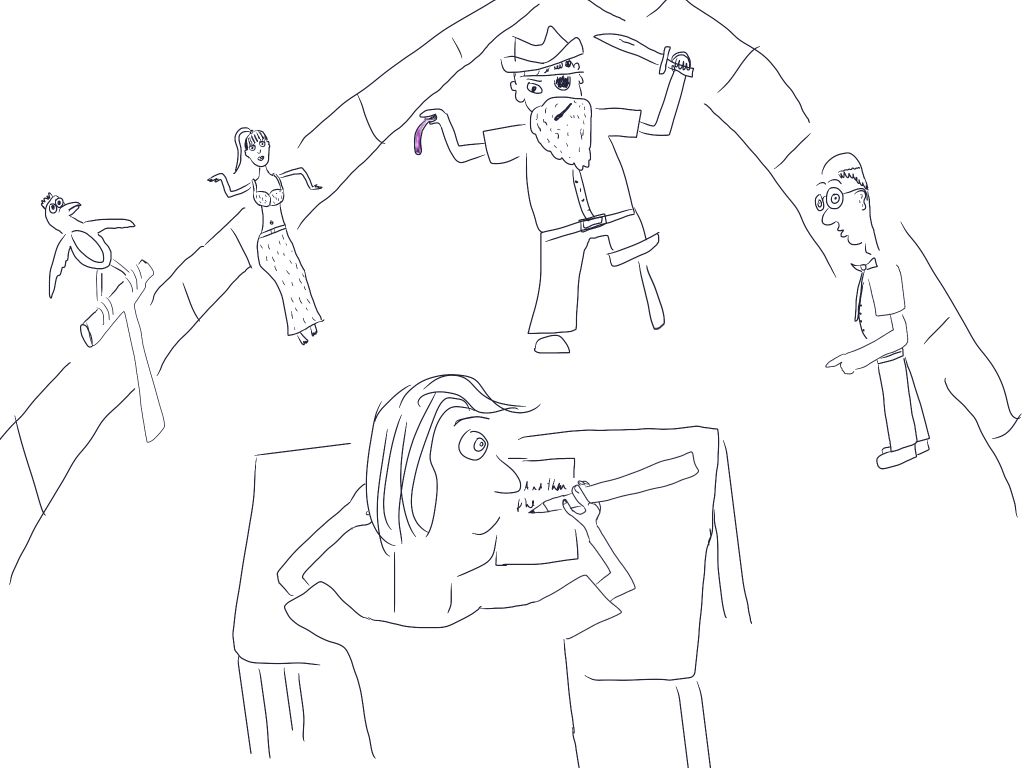 I’m writing this from a pirate ship, but I’m not a pirate nor do I know how to write.

Wait, what? I’m writing right now, and, Ah!, what’s this eyepatch!? What type of whacky world is this?

“So ye don’t think ye’s a pirate do ya?” Squawks a pirate parrot somewhere off in my blindspot, “Then why’s ye wearing that eye patch?”

The pirate parrot has a point, and I guess he can read too because I’m only writing this, not speaking it out loud, and yet he still called me out.

I turn to reveal him from the darkness of my missing eye. Wait, am I really missing an eye or is my perfectly healthy eye just covered? It’s time to uncover my eye cover and see if I can see.

“Wait, let me help you with that darling,” says a beautiful belly dancer in a jingly gold dress.

This is great. Now that she’s coming over to take off my eyepatch, my hands are free to continue writing out these events as they happen.

She’s walking over and…

“Stop right there!” Says my 6th grade English teacher to the beautiful belly dancer in the jingly gold dress.

Mr. Marchado is now turning toward me, “Why’d you start this story saying you didn’t know how to write?”

“I don’t know,”  I write in response.  (Hey, Mr. Marchado, quick question. Should I have put ‘I don’t know’ in quotation marks? Technically a character was responding, but it was me, the narrator, who was writing a response as opposed to speaking it.)

Mr. Marchado isn’t looking at my paper anymore so I guess I’ll never know the answer to the “I don’t know” quotation dilemma.

Instead, Mr. Marchado is looking at Kooky Old Purple Beard who just burst through the door and is coming straight toward me sneering,

“Why do ye care if ye can write when ye could be a pirate and plunder all the riches in the South Sea?”

“Oh well, it’s because” Before I can finish writing him my response Kooky Old Purple Beard snarls, “I can’t read!”

I’ll tell him out loud…

“That’s a great answer,” replies Kooky Old Purple Beard, “but is it good enough to keep ye away from wanting this?” The pirate holds up the most precious plastic purple pollywog I’ve ever seen.

“Oh my!” Swoons the beautiful belly dancer in the jingly gold dress. “What a precious plastic purple pollywog!”

The belly dancer seems to be in a trance. But I don’t blame her. I might go touch the pollywog. It looks pretty awesome.

“Hey Mr. Marchado! Are you looking at my paper again?” <—(If so, should that be in quotations?)

“Yes, I’m looking down at your paper, and I don’t know if that should be in quotations! However, I do know that you should not touch or even look at the precious plastic purple pollywog. See, if you fixate on the pollywog it takes all of your youth so that it can remain a pollywog and, in turn, you turn into a frog.”

“I’m going to go touch the pollywog.” (and stick with the quotations)

Woahhh. That was terrible and crazy. Let me give you a recap of the last 20 seconds because I was away from my paper and couldn’t write it down.

Basically, after I said I was going to go touch the precious plastic purple pollywog I stood up and got super sucked into a pollywog pirate trance (hence I wasn’t writing.)

Naturally, I’m very upset right now, but I must carry on. See, right before Mr. Marchado slipped his dying body overboard into the sea he called out, “Never stop writing!”

So to report on some good news, it seems the beautiful belly dancer in the jingly gold dress is coming out of her trance and doesn’t seem to remember anything that has taken place in the last couple minutes, including the murder.

Also, the parrot from the beginning of the story who provoked all of this is now sleeping peacefully with his head tucked beneath his feathers. I guess belly dancers, and pirates and magical pollywogs, and even murder wasn’t exciting enough for him.

“So where were we?” Says the beautiful belly dancer in the jingly gold dress, “Ah yes, let’s remove that eyepatch of yours and prove that you’re no pirate.”

The beautiful belly dancer in the jingly gold dress is standing right behind me.

Embarrassing. She can read… and is beautiful.

Peripheral vision! Eye! Eye! I’m not a pirate at all. This is great news.  From now on, I’ll have two eyes open to watch the whacky ways of this world, and I’ll write it all down in honor of Mr. Marchado!

“Sounds like a plan, but for now why don’t you take a break?” asks the even-more-beautiful-now-that-I-can-see-her-with-both-eyes belly dancer in the jingly gold dress.

“It will be tough to write with both your arms wrapped around me,” She says.

Ok gotta put down the pencil now. See you all tomorrow!